The release date is easy, the work I’ve actually been dreading is setting up all the individual milestones that get me to that day. Tomorrow is July 1st which is, give or take 24 hours, the middle point of the year meaning I have about six months of development time before the end of the year deadline.

I need to take the list I came up with in the last blog post and assign completion dates for each of those development milestones:

My guess is this will change somewhat from now until the end of the year, so every time I reach one of these milestones I’ll make a blog post and compare the actual time with what I projected here.

EDIT: I just realized I have not decided what this game will get released on. I’m thinking IOS/Android/PC. That seems like a great start to me and luckily it’s Unity and they have build libs for all those platforms.

I believe in deadlines. At their worst, you deliver the product late, but still earlier than if you had not set up a deadline. They seem to mean more than what you would call a “goal.” In this spirit, I have set a deadline up for the release of Car Coder: December 31st, 2018.

I do not feel confident about meeting this deadline, but I  don’t trust the idea of confidence. Courage makes more sense to me; you are fearful, but you work through it. I suppose confidence is something you have after you develop courage, maybe? To me, confidence equates to faith in yourself, but I won’t have much of that if I don’t witness myself having courage.

I need to develop a punch-out list. I need to itemize everything that’s left to do before I can commercially release this game. It won’t be expensive, but I’m trying to build some capital up so I can do more stuff than I’m doing now, so here goes:

That seems like the complete list. If I think of anything else I’ll add it. Now I need to take those items and break them down into actual implementation. 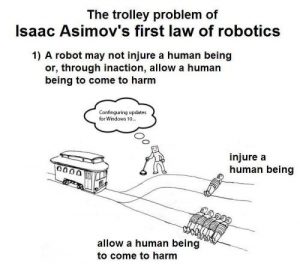 So, I made the first level where the car starts at a certain speed and you have to figure out how to dodge a “pedestrian” (which is just a darth vader cardboard cutout at this point). I had to figure a few things out to make this possible, one being how to stop time before the player clicks the start program button otherwise the car just speeds off before anything has happened. I’m considering doing this a different way, where the car actually speeds up in a startup mode on a stretch of track, and then the controls kick in once the car has reached a certain speed. My real goal here is to hack the trolley problem to show that there are always options, so having this startup time might be important, but for now this is the way it works. The current level is impossible to win though, because no matter what you do, you make contact with the pedestrian. What I need to do is gauge the level of injury to the pedestrian as well as the driver.

Another thing I need to do is create an actual parsed/interpreted programming language for the levels, but now that I think about it, I should just defer to code modules in a helper class instead of going through the trouble of creating a parser. My goal is to have the final, polished version of the game released by the end of the year, so I need to save time wherever possible. I’m finding that the levels get more and more complex, so having a generic handler won’t work for all situations. I consider myself a YAGI enthusiast, so I probably won’t do this unless it’s absolutely necessary.

Also, I don’t like the too wordy name,  “Self Driving Car Programmer”. I do like “Car Coder,” so this will be the release name unless you or I think of something better. I don’t have the new level up yet because I’m trying to figure out an easier way to build and deploy the code to the server.